In order to figure out which CMS works best depending on the type of project at hand, I've tried many of the top recommendations listed at CMS Matrix. Among all of the CMSs there, two platforms stood out: Drupal and WordPress. Since I've developed more websites in Drupal, I may have bias leaning to that side, but this is a guide that may help potential clients decide why one is better to use than the other for their own website.

The main difference between the two is that Drupal is considered a Content Management Framework while WordPress began as a Blogging software. This means that Drupal has more flexibility and less restrictions on how the website is mapped out. Coming from a Computer Science background, the user interface and development process of Drupal is more intuitive in terms of customizations, layout options and programming for extra features. Why? Drupal is known for its multitude of modules. Compared to WordPress plugins, Drupal modules can be utilized in different ways that may not be what its author/programmer intended.

To make this idea simple, think of Drupal modules as objects. All objects have its own traits and characteristics that can be used in different circumstances. For example, the tabbed UI you see in this website is a module. It can be used to display my projects depending on the category/company. It can also be used to separate out the different headings for my About Us page. All the while, still using only one module.

In comparison to WordPress plugins, which are intended for one purpose only. Most plugins in WordPress are designed to do one thing and that's to create user interface for the WordPress blogging system. Though WordPress has come a long way from its main purpose as a blogging tool, it still has a long way to go before it reaches the flexibility that Drupal has. One point is that WordPress "lacks" custom content types that can be displayed in any way imaginable using Views (for Drupal).

Purposely quoted "lacks" because recently discovered that some WordPress programmers have created a "copy" of Views from Drupal called ... well Views http://wp-types.com/home/views-create-elegant-displays-for-your-content/ . Though, instead of being an open source addition to WordPress plugins, it's actually a Third-party paid addon worked on by one group only.

Everyone is entitled to their own opinion, but my opinions come with facts. What is open source? Its purpose is to have a collaboration among individuals of a community to openly share code and improve the software. This allows the improvement of a software to happen at a much faster rate. Why? Two heads are better than one.

In Drupal's case, multiple heads are better than one. If a software is only being worked on by one group, how much faster can it improve than having a lot of programmers, developers and users finding errors, fixing those errors, and documenting those errors at a much faster rate? To relate to the Views plugin that WordPress has, why would anyone want to use a "copy" of an idea, if you can use the "original" that has been improved upon much longer and quicker than the copy?

As I've warned from the beginning, this comparison is a bias more for Drupal. But here is what's good about WordPress. WordPress is simple to setup. Why? Because its main purpose is for blogging. If that's all you are after, WordPress is all you will need because the flexibility and capabilities of Drupal will be an overkill.

However, if it is a more customized website with different content types (not just a blogging type of content) such as videos listing, news display, audio music player or E-commerce, doing these in WordPress are not recommended. Though WordPress may have plugins for these features, the display of them is not customizable enough. Unless, of course, you want your site to look the same as every other WordPress site in the world. Then yes, it is possible to make your website the same as everyone else's and lack uniqueness. Everyone has their preferences, and it's really up to the client to decide what they want. 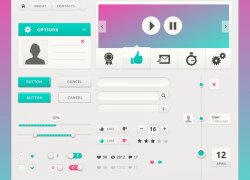 Part I: How to Improve Your Website's User Interface?

How Do You Plan For Security?

How To Make Quality Connections?

One of Frances’ truly unique qualities is her ability to transfer my vision for the project into actual working, functioning pages. Her quality is first-rate, and her ability to responsibly meet deadlines is very rare in my experience.